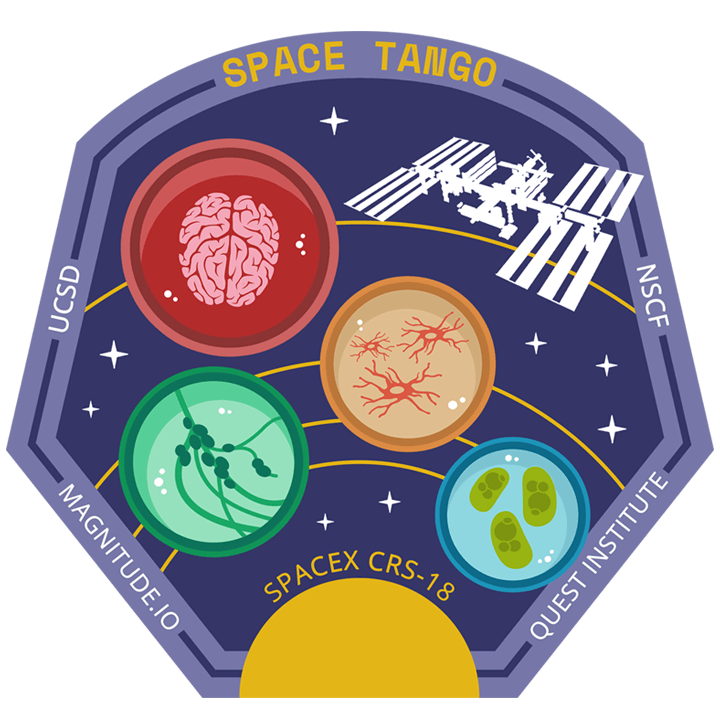 Scheduled to launch on July 21st at 7:35 PM EST from Cape Canaveral Air Force Station, Space Tango customer payloads will be making their departure for the International Space Station for the SpaceX Commercial Resupply Services-18 (CRS-18) mission. As we get closer to the final countdown, we invite you to take a look at the amazing science our customers are exploring with us.

The Effect of Microgravity on Human Brain Organoids

Organoids are small, living masses of cells that interact, grow, and can survive for months. They serve as a useful model system to understand how larger systems respond and adapt to changes in the environment. This investigation specifically explores how brain organoids respond to the unique environment of space. Preservation of cognitive and neuronal function is essential for any space mission; thus, it is essential to understand and characterize cellular interactions in microgravity as well as neuronal adaptations to the stressful environment.

Adding to our understanding of brain cells and their cognitive function is fundamental to protecting human health for space exploration as it paves the way for additional investigations on changes neurons experience during spaceflight, including studies of pharmacology, disease, aging, and more. Neuronal organoids are used for a vast range of studies on brain function, including effects of disease, aging, and understanding of drug molecule actions. The results of this investigation is expected to advance organoid technology, enabling a wide variety of new experiments using organoids in microgravity as a test platform for stress on the brain.

The Effects of Microgravity on Microglia 3-Dimensional Models of Parkinson’s Disease and Multiple Sclerosis investigation studies 3D neuroglial cell cultures derived from iPSCs of patients with Parkinson’s disease and multiple sclerosis, to analyze the migratory capability of iPSC-derived microglial cells in microgravity.

Exposure to microgravity and radiation, as it occurs on the International Space Station (ISS), causes significant mechanical unloading of mammalian tissues, resulting in rapid physiological alterations. While many studies have focused on the impact of microgravity on the cardiac and musculoskeletal systems, microgravity is also known to have a significant impact on the central nervous system. Research using a variety of tissue types has demonstrated that microgravity increases proliferation and delays differentiation of stem cells. Cell-cell interactions are critical for neuronal communication, but to date no studies have yet evaluated these effects in human cells in microgravity.

Taking advantage of the potential of the induced pluripotent stem cells (iPSC) to differentiate into any cell type of the human body, we will evaluate retrospectively cell–cell interactions and migratory capabilities of iPSCs-derived microglial cells from patients with Parkinson’s disease (dopaminergic neurons) and multiple sclerosis (cortical neurons), versus co-cultures of the same cell types from healthy control subjects. The cells will be maintained on the International Space Station (ISS) for one month.

Parkinson’s disease and multiple sclerosis are not developmental disorders, and modeling these disease states in vitro is difficult, even with advances in reprogramming technologies. More complex models containing multiple cell types, and fully mature cells are used to better represent the disease progression, allowing for a more suitable platform for development of potential therapies.

This investigation demonstrates how neuronal cells grow and survive in a microgravity environment, a fundamental biology topic essential to human survival in space exploration. This investigation will also explore gene expression changes that occur as a result of microgravity exposure, helping us understand how to protect astronauts in spaceflight. It is the first long-term cell culture investigation conducted in microgravity using human patient-derived iPSCs to study Parkinson’s disease and multiple sclerosis. This research will provide valuable insights into the mechanisms by which neuronal cells mature in 3Dcultures, factors influencing migration of glial cells in organoids, and changes in gene expression that may play a role in these disease processes and may well have an impact on the discovery and development of biomarkers and therapeutics.

The Effects of Microgravity on Microbial Nitrogen Fixation

The Effects of Microgravity on Microbial Nitrogen Fixation (Microbial Nitrogen Fixation) studies two species of soil-dwelling bacteria to understand microgravity’s effects on microbial nitrogen fixation. One species of bacteria is a free-living strain known as Azotobacter vinelandii ; the other is a symbiotic strain found growing in nodules on the root systems of leguminous plants and is known as Rhizobium leguminosarum. In addition, Escherichia coli (not capable of nitrogren fixation) is included as a negative control.

Nitrogen is one of the most abundant elements found in living organisms alongside carbon, hydrogen, and oxygen and is required for basically all biological metabolic processes. For example, nitrogen is a key component in amino acids/proteins, it forms the nitrogenous bases of deoxyribonucleic acid (DNA) and ribonucleic acid (RNA), and it is used in biological signaling pathways. Life cannot exist without constantly metabolizing nitrogen in one form or another, and due to this universal presence in living organisms, massive amounts of nitrogen are continually being cycled between the environment and biological systems.

There is no shortage of nitrogen on Earth, in fact elemental nitrogen comprises 78% of the gases found in Earth’s atmosphere, making it by far the most common gas found in the air we breathe. However, nitrogen’s atmospheric form (N2 ) is inert and therefore biologically unavailable for use in life-sustaining metabolic processes. Nitrogen must undergo a process known as fixation in which it is converted into ammonia or a similar nitrogenous compound before it can be readily used biologically. This process occurs biologically or industrially. Industrial fixation involves a complicated procedure that requires high pressures and temperatures and is not a self-sustaining model for ammonia production (this is how fertilizers are made, for example).

Biological fixation, on the other hand, is carried out by soil-dwelling microorganisms known as diazotrophs. In this process, the microbes use a class of enzymes known as nitrogenases to convert N 2 into NH 3 (ammonia). Diazotrophs generally fall into two categories: free-living or symbiotic with certain plant groups, most notably with leguminous species. Biological fixation is the only natural process that performs this conversion and therefore plays a crucial role in agriculture. As humans extend their stays in the microgravity environment, the need for space-based agriculture has risen in importance. Given the importance of the relationship between plant growth and diazotrophs, this project aims to further our understanding of the concept by investigating any potential effects of the microgravity environment on the process of biological nitrogen fixation.

Quest Institute Multi-Experiment, Educational Investigation – NextGen-2 investigation is an experimental platform carrying five individual experiments exploring the scientific principles and space applications of magnetism. Students who designed the investigations can interact and customize various activities related to magnetism in space and to run similar tests on the ground.

This series of investigations on magnetism advances understanding of concepts that could support design and implementation of future microgravity research. This work also inspires students to pursue studies and careers in science, technology, engineering and math, creating the next generation of researchers and explorers. Increased knowledge in the areas of magnetism, use of electromagnets, the Earth’s magnetic field, and heat transfer also has potential applications in several research and industrial settings on Earth.