Scheduled to launch on April  30th at 4:22 AM EST from Cape Canaveral Air Force Station, Space Tango customer payloads will be making their departure for the International Space Station for the SpaceX Commercial Resupply Services-17 (CRS-17) mission. As we get closer to the final countdown, we invite you to take a look at the amazing science our customers are exploring with us. 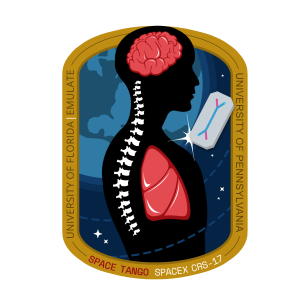 Freed from the effects of gravity found on Earth, the International Space Station (ISS) provides an environment where researchers may study human health in microgravity, allowing them to decouple the force of gravity from other effects that impact brain cell function. Different Investigations using the Brain-Chip study how other space travel stressors — such as hyper-gravity experienced during launch, reduced availability of oxygen known as hypoxia, and increased levels of stress hormones — influence brain function.

To investigate the biological basis of immunosuppression in space, investigators infect artificial lungs with bacteria to mimic an airway infection and record how the lung cells respond in microgravity compared to the response in duplicate models on Earth. Using the bone marrow models, investigators also examine how white blood cells mobilize from the bone marrow into the bloodstream in microgravity compared to their mobilization on Earth.

Electrodeposition Observation in Microgravity is a custom electrochemical microfluidic device that allows the observation of electrodeposition pattern formation and examines the role of convection during this process in microgravity. Electrodeposition is a process by which a material is deposited onto a conducting surface. In Earth’s gravity, convection affects the patterning of the material. Eliminating the effects of gravity is expected to result in more organized and quicker material growth.

The lack of convection in a microgravity environment may influence the instability patterns formed during many fluid-based processes. By understanding the process during the phase transition to a solid interface may allow for the development of new technologies that may forward space exploration. Improved knowledge of the role of convection on pattern formation during electrodeposition may improve manufacturing using this process on Earth.

The focus of the Microgravity Exposure on Medicinal Plant Seeds investigation, flying on SpaceX CRS-17, is to evaluate hemp seeds and their potential opportunities for the discovery of biomedical applications related to CBD when exposed to microgravity – an area that is being highly studied due to the recent FDA approval of hemp and cannabis-derived drugs for conditions like epilepsy.

At the completion of this mission, we intend to grow the seeds on Earth to evaluate the following:

We anticipate that non-proprietary data generated from this initiative may be helpful to the community at large as it may assist in developing biomedical applications related to CBD. With the potential to improve human health, this non-proprietary data will be made publicly available to accelerate those efforts for additional benefits to life on Earth.

The Cell Culture Module Fluid Behavior Demonstration tests variables of fluid exchange in a common 96-well culture plate. Images from a series of fluid experiments are used to assess capillary action of the plate in microgravity and results are compared to ground-based controls to identify an optimum microgravity fluid exchange procedure. The data help optimize media exchanges for future cell culture research in microgravity.

Increased understanding of fluid exchange in commercially-available 96-well plates enables the development of more reliable and affordable ground control studies for microgravity cell culture experiments. Using the same plates for both space and ground allows scientists and researchers to isolate the effects of microgravity. The ability to control fluid exchanges in these culture plates also opens microgravity experiments to a wider range of investigations and supports the expansion of commercial use of the space station. Increased understanding of fluid exchange in commercially-available 96-well plates also expands cell culture research capabilities on Earth. This research has important applications in a variety of fields such as medicine and agriculture.